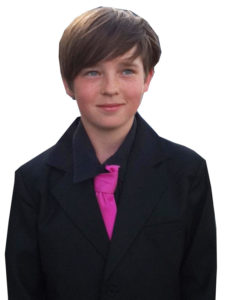 Josh was a carefree kid. He and his two brothers were very busy, always playing outside when not at their soccer or Auskick. He enjoyed school and seeing his friends. When Josh was 8 he started to complain about a dry throat and he was drinking a lot to get rid of it. He also needed to wee a lot. He would even go a couple times during dinner. At first, I didn’t believe him, but it kept going so I took him to the doctor thinking it would be a urine infection. The doctor did a urine dipstick test and a finger prick test. He told me straight away that Josh had Diabetes and said that we had to go to the Royal Children’s Hospital. I tried to calm myself down by thinking, he is probably just being cautious we will go to get checked and be home later today. This was the beginning of the worst day of my life.

I was in total denial, until they gave me the same news at the Royal Children’s Hospital. Diabetes Type 1. Then it was devastation and guilt. Did I cause this? Could I have done something to stop it? Is it my fault? I had no idea what Type 1 was, no one in our family had it. A friend of my brother has it, but so did his dad. How did Josh get it? The doctors said that we were lucky that we took him to the doctor so quickly. We stared to educate ourselves and slowly and dreadfully I realized there was no going back, and my beautiful boy’s life had changed forever.

Josh spent a week in hospital where doctors, social workers, dietitians and a range of specialists gathered around us, and taught us all they knew about how to live with Type 1 Diabetes. Then we left the hospital and suddenly, we were on our own…a steep learning curve…how could we do this! The diet control, blood glucose readings, insulin dosages, highs and lows quickly became routine as they were all pivotal in keeping Josh alive. Josh also became used to the routines that by the age of 11/12 he was determined to do it all by himself! This lasted until his teenage years.

The teenager years are hard on their own but add diabetes and it becomes a rollercoaster of emotions, blood glucose level fluctuations, denial and rejection of diagnosis, psychological and social pain. Josh wrestled with the fact he never got a ‘day off’ from his condition. He got angry at his Diabetes, angry at the universe for giving it to him and angry at me because I still had to be involved. Twice I found Josh unconscious where we rushed him to hospital just in time…he had extreme diabetic ketoacidosis! Josh didn’t want to have my help. It gave me the feeling of uselessness and fear.

Josh is now 18. What if something happens when Josh is driving or when Josh is living independently. I hope there will be a cure someday, but in the meantime I want Josh to get through it as best as he can. I want him to have a guardian angel who he won’t resent and who can be there when it counts. Josh needs a medical alert dog who will tell him when he is low and not stop pestering him until he does something to correct the level! A medical alert Diabetes dog would give me peace of mind and Josh the security and ability he needs to live a life beyond our family home. The freedom to be whoever he wants to be, with the chance to pursue his dreams.