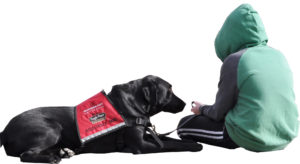 James was a confident 12-year-old boy who loved hanging out with his friends, having sleepovers and enjoyed eating out. He led a very active lifestyle, training twice a week for Rugby and having a game every Saturday. But this all changed without any warning when James got extremely sick, overnight. He had trouble with breathing, could not walk on his own, had a strong pain in his stomach, was extremely pale with red cheeks and had a strong sweet smell. He had lost so much weight, because he could not eat or drink, that even I, his own mother, had trouble recognising him.

We were desperate and called 000. As soon as the paramedics arrived, they told us that it was not an emergency. Put him back in bed and check on him in a few hours. It was probably gastro. Just give him some Panadol and he’ll be fine. We were equally surprised and confused about this statement and we had the feeling that the paramedics ridiculed us. We knew that we had to take James to the hospital quickly, but why didn’t they want to take our son? I could not understand it, so I had no other choice but to drive my son to the hospital myself. James father had to stay home to take care of the other children.

The car ride was terrible, James collapsed twice, and I had to drag him into the hospital. The triage nurse recognised the critical condition and diagnosed James in 30 seconds! We transported him straight into emergency. I remember thanking her for believing that my son was very ill. His body was shutting down and he had trouble talking. At times he didn’t appear to recognise or acknowledge me. He was so critical, without assistance, he had no more than a few hours left to live! James was diagnosed with severe Diabetic ketoacidosis. Had I not taken him to the hospital immediately, James would not be with us today. James was diagnosed with type 1 Diabetes. We were overwhelmed with the news, no one else in the family had Diabetes and we didn’t know much about the condition. We also have another child with special needs so there was a lot to consider. But before we could think about that, James needed to get through his life threating Ketoacidosis in the ICU.

We had a wonderful team at the hospital who helped James during his stay. A professor from ICU really helped us get through those initial and darkest days and he still monitors James now on a regular basis. I took weeks off from work to help James with his daily injections and finger prinking. My husband and I went to ‘diabetic day school’ to learn the basics to keep our son alive. We began carb counting, blood glucose monitoring, insulin injections and juggling the needs of James health and life, but even before we could come to terms with his diabetes, James got another diagnosis -coeliac disease. This means that he cannot eat any gluten – so counting carbs just got harder. We had to be really careful with his food to make sure it didn’t have gluten, or this would play up with his blood glucose levels and make him really sick for days. James was also struggling with the ‘notoriety’ of having to inject in public…he couldn’t handle the stares and comments from others.

Living with T1 Diabetes is really hard. We often have sleepless nights because James levels fluctuate so much, and we have to check throughout the night to ensure his levels don’t go too low. A few weeks ago, I slept through my 2 o’clock alarm. I woke in the morning to an emergency alarm on James’ pump. His glucose level was at 1! We rushed to the hospital just in time. Again, I nearly lost my son!

We need something that cannot fail, does not sleep through an alarm and can detect a reading and advise me – even wake me if I am asleep. This something is a dog’s nose! A service dog trained specifically to detect the smell of a hypo and to alert when this occurs. The dog’s nose is never off duty and will not fail to smell the hypo. The dog would let James return to some of the freedom of his pre-diagnosis days and allow him to behave like other boys. The dog will give him support, help him control his blood glucose levels, make him feel safer and let him be less anxious about the future. A dog would give us, peace of mind, by reducing the likelihood of a third occurrence of almost losing James!